A lifelong interest in things historical has led Hazel to undertake practice-led research in the field of musicology, turning dusty old manuscripts into living musical performances.  She was an honorary fellow at the University of Southampton from 2012-2015, and is now a researcher at the University of Leeds, sponsored by WRoCAH and the AHRC. Hazel’s research interests include: 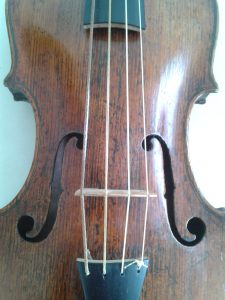 The rise of the violin as a solo instrument in England during the seventeenth century is a neglected field.  Hazel’s work seeks to demonstrate that, contrary to popular thought, a distinctive, idiomatic, and imaginative solo repertoire for violin existed during this time. She is gradually recording this diverse and engaging repertoire with the aim of putting early English music back on the map.  Recordings to date include the sonatas of Daniel Purcell, William Croft and Gottfried Finger, with keyboard player David Pollock.  For more information on these, see here.

Hazel’s PhD research focuses on the use of alternative violin tunings (scordatura), particularly in English repertoire.  Influenced by the English lyra-viol tradition, as well as by immigrant foreign players who used the technique, scordatura usage seems to have been more widespread than we might expect.  Hazel is uncovering repertoire and experimenting with historical stringing, to explore the different soundworlds created by the modified tunings.

An interest in historical languages and linguistics drew Hazel to medieval poetry and music, particularly the works of the troubadours, trouveres and related forms. Fascinated by the interplay of language and melody in this repertoire, with its implications for rhythm and rhetoric, Hazel works closely with singers to explore its expressive potential, accompanying them, where appropriate, on the medieval vielle.  Outputs include a recording, The Language of Love, with soprano Faye Newton.